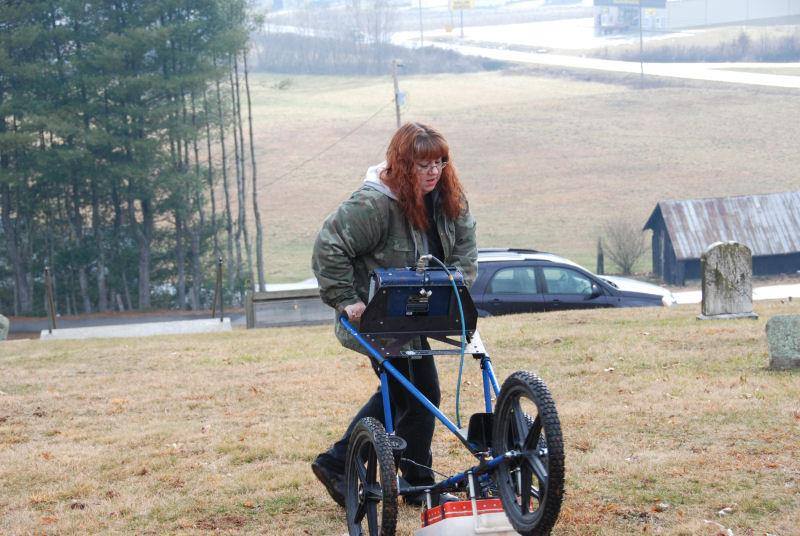 Conducting GPR at a cemetery in NC

I am The Paranormal Genealogist, a paranormal investigator/educator that infuses the paranormal with genealogy/historical research and I spend my time lecturing around the southeast and on national radio on how to do research on a haunted location, and how to incorporate the two. I teach para-enthusiasts and professionals why it is important to understand that the “tv show” or “hollywood” history of a location is not always correct. Using examples of Lavinia Fisher at the Old Charleston Jail and Pearl Bryan at Bobby Mackey’s Music World I show how para-entertainment has skewed history and how incorrect the “facts” they supply to their audience and paying paranormal investigators are and how that can hinder a paranormal investigation.

I became infatuated with the paranormal as soon as I saw the famous picture of the Brown Lady for the first time in 1976, at the age of eight. Around that same time, Leonard Nimoy hosted a show on network tv called In Search Of, which added to that fascination for all things “not normal”.

At the age of thirteen, I found my second passion, genealogy. As I got older I learned how to incorporate the two to improve my investigation skills and more often than not, our clients will end up with not only any data that was collected, but whatever I was able to dig up regarding the histories of the families of the spirit activity I was investigating. The extra research of not only families, but of the actual land, lead to more detailed EVP sessions and provide information for questions an investigator might not normally think of.

I also use historic metro Atlanta locations as examples of how even the location historians are not giving the true facts. As a former assistant director and department chair for the National Paranormal Society I have authored many educational articles on both research and ancient mysteries that are used as training material for members. In 2003 my husband, Dave, and I formed an “unofficial” research team that years later transformed into Timeless Paranormal, and we travel all over the southeast to help individuals and historical societies try to find the answers and help they have been seeking. In 2013 Timeless Paranormal, was featured in the A Day Trip documentary shown on EATV 7. In 2014 I filmed the requested pilot for American Ghost Towns for PBS, showcasing 30 years of her genealogy research and telling the real story of Cold Mountain (the fictional novel by Charles Frazier and award winning movie with Jude Law & Nicole Kidman).

In 2016, I published my first book, “How NOT to be a Ghost Hunter” and followed that with “Paranormal Fakelore, Nevermore: The Real Histories of Haunted Locations” which will be released summer of 2017