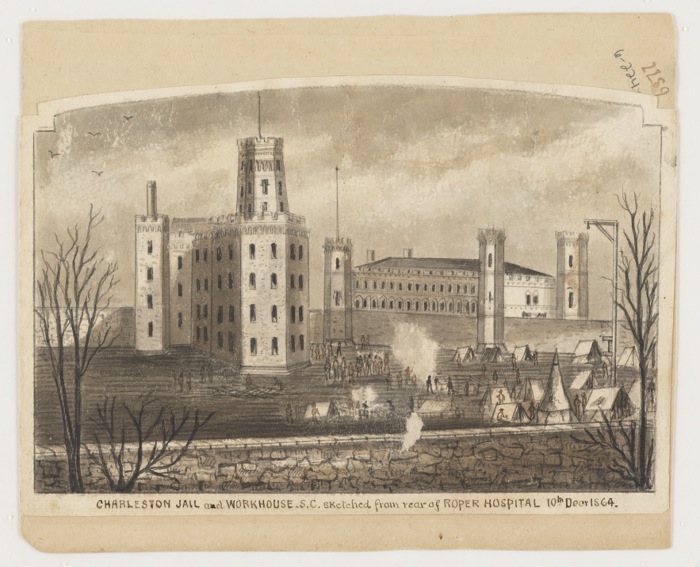 Most anyone who is the slightest bit interested in “ghost hunting” has heard of Lavinia Fisher and her exploits outside the city of Charleston, SC and at the Old Jail, but in case you haven’t, let me give you a rundown of the “facts” that are given on true crime blogs, ghost hunting shows, haunted location shows, and ghost tours.

Lavinia Fisher was America’s first female serial killer and the first woman executed in America (how is that for history making!). She, along with her husband John, were arrested, tried and convicted of mass murder and hung at the Old Charleston Jail. Wearing her wedding dress (and a noose), she shouted, “If any of you have a message for the devil, say it now for I shall see him in a moment” and flung herself off the platform before the hangman could perform the duties for which he would be paid in alcohol (good thing it wasn’t tea).

Lavinia and John were innkeepers who drugged their patrons with a special tea (rumored to be oleander) and secreted them down into their cellar via hidden trapdoors in the bedrooms to murder them (the number of victims varies). One man, John Peebles (or Peoples), a weary traveler looking for a bed for the night, was almost a victim.

After sharing a late dinner with the Fishers, Mr Peebles retired to his room and a short time later Lavinia brought him some  of her “special” tea to help him sleep. He did not like tea, but he probably did not want to offend his host so he dumped it out of the window when she was not looking (She was probably trying to make sure the bed was in the proper position for her nefarious plan).  Mr. Peebles was concerned about personal questions the Fishers had asked during dinner and it occurred to him that he might have said too much and they might attempt to rob him, so instead of going to bed he decided to wait out the night sitting in a chair. A little while later, he was stunned to see his bed disappear (and the tea cannot be blamed). Mr. Peebles escaped out the same window and ran to the police to make a report (we have no record if he was tea stained or not). The sheriff hastened to the inn and during the investigation he found a cellar with hidden tunnels full personal belongings from those that had been reported missing and approximately 100 skeletons.

They were tried in May of 1819 and convicted of murder and sentenced to hang. They were housed in the jail until they were hung in February of 1820 and they were buried in the Unitarian Church Cemetery in Charleston.

Maybe she isn’t as ‘at rest’ as she should be? It is reported that Lavina is one nasty spirit that not only haunts the Old Charleston Jail, but attacks people as well.

I think we can agree this is basically the story most of you are familiar with can’t we?

What would you say if I told you that there are only 3 facts in that tale that are actually true? Will you call me a paranormal blasphemer or will you save handing down a judgment that is just as unfair as the one passed on Lavinia and hear me out? Yes?  If you are interested in reading about the real history be sure to pick up a copy of “Paranormal Fakelore, Nevermore: The Real Histories of Haunted Locations”