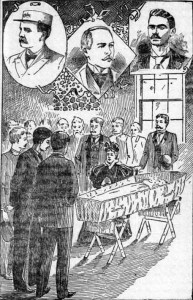 Where is Pearl’s Head?

The last decade of the 1800s was a murderous one. Bloody Victorian crimes were making sensational headlines and adding to the coffers of newspaper owners. In 1896, coming off the heels of the Borden murders and H.H. Holmes, a murder occurred that encompassed 3 states and just about every newspaper in the nation carried the saga, some of it bordering on tabloidism just so they could have something in print. Along with the “normal” murder case betrayal and lies, it included unrequited love, chemistry, conspiracy for a criminal operation, feticide, mobs making a mad dash to collect muderabilia, monies made from crime scene touring, a fetus in a peppermint stick jar, and a manhunt for a head. The 21st century sees people adding even more fantastical details that keep what was once deemed the “crime of the century” in the headlines and keep it a money making business.

There is no way of knowing how many thousands of people have paid to investigate Bobby Mackey’s Music World in Wilder, KY; and there is no way of knowing how many of those people did their own research before going instead of listening to the urban legends that are told in books and tv shows about the location. A lot of money has been made since a book published in 2001 made the first untrue claim that it had been a place of satanic worship in the 1800s. The snowball effect had been started and it gets bigger every day. Patrons and paranormal investigators have had lies that line the pockets of “parastars”, book publishers, and tv producers shoved down their throats for decades; and it makes me wonder why the majority people seem to care so little for the truth of what actually happened.

The basic story told today regarding the Pearl Bryan murder goes something like this: Pearl Bryan was pregnant with Scott Jackson’s baby. She wanted to get married and he tricked her into coming to Cincinnati from Greencastle, IN. When she arrived, he and Alonzo Walling murdered her and because they were members of a satanic cult, they beheaded her and threw her head down a well located in the basement of an abandoned slaughterhouse as a blood sacrifice. Bloodhounds used in other famous cases were brought in and they tracked Pearl’s scent to the same slaughterhouse. Refusing to tell anyone what had really happened, they stood on the scaffold the day they were hung and threatened to come back and haunt everyone.

Would you like to take a guess how much of the above is true? Four things. If I have peaked your interest, be sure to pick up a copy of “Paranormal Fakelore, Nevermore: The Real Histories of Haunted Locations”   to learn the real history behind this haunting case.